*Affiliate links used. Full disclaimer details here.
Today’s post won’t be for everyone. And that’s totally fine with me! Skip it and come back another day 🙂 But we’re mostly ladies here and biologically, this is a truth we all have to deal with every month: our periods and how we manage them. We all know about pads, tampons, liners and pills we can take to deal. But a menstrual cup is something getting more attention these days and I decided to take a pass at one called the Saalt Soft recently and wanted to share my reasons why I tried it and how my first cycle with it went down. Here’s my experience using the Saalt Soft Menstrual Cup…

Some of you may be asking, “Whyyyy a menstrual cup ew that’s so gross and weird!”

I totally hear you and I was in the same place for awhile. I also thought it looked super uncomfortable.

But here’s some things that are said to NOT happen during your period if you are a cup user: 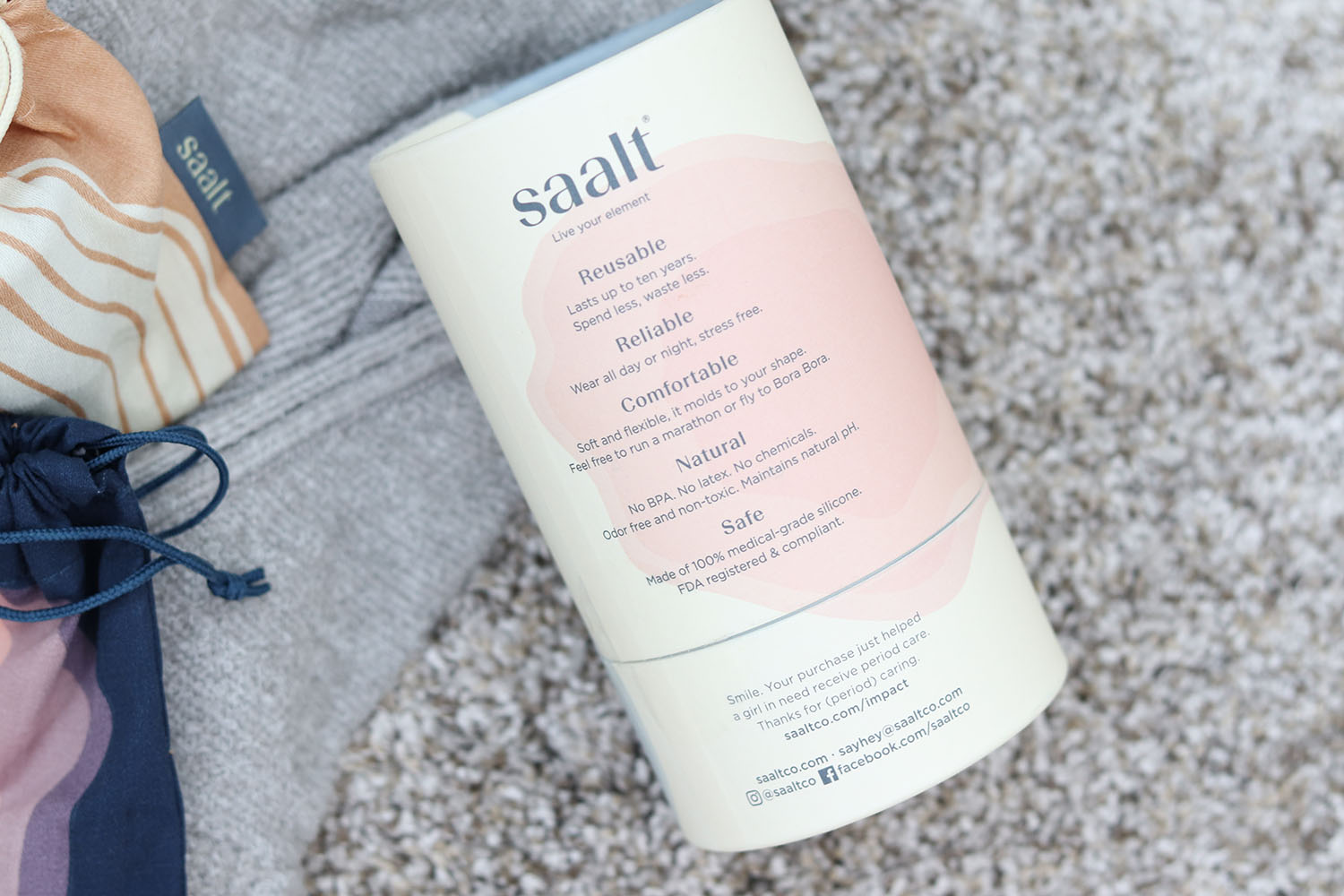 I hated the idea of pads but during infertility treatments, many professionals along my journey advised me to use pads because the less things interfering with my body ‘down there’ …the better. Yes, using pads did lessen my cramping but they’re yuck.

FYI – tampons can increase cramping because you’re essentially ‘blocking’ your body’s ability to muscle spasm out your blood/lining. So the body doesn’t like that cotton wad up there and intensifies your cramps (muscle spasms) to try and push the blood (and tampon) out and away.

I used tampons, like 90% of women probably do, but some brands would really irritate me and make me feel like I legit had a dry cotton wad shoved up there and I just didn’t like pretty much anything about them except that it wasn’t a pad.

I also always was worried about leaking especially the first couple of days of my cycle. So annoying. I refused to believe in 2019, this had to be a thing anymore.

So after watching the hysterical Samantha Ravndahl on YouTube and her menstrual cup reviews, she convinced me to give the Saalt Soft a try.

The Saalt Soft (as compared to Saalt’s original cup) is a little different than other cups out there because of its softer feel. It’s meant for those who feel they are very sensitive. It was created along with the ladies from PutACupInIt.com (an AMAZING resource for new cup users… they even have a QUIZ to tell you what cup may be best for you (DISCLOSURE: Saalt Soft didn’t come up for me, but I love it).

They tried to create the perfect not-too-firm/not-too-soft cup with just the right shape to suit a MAJORITY of women.

The Saalt Soft comes in Regular or Small sizes. You’ll need to figure out if you have a high or low cervix to decide which is best for you (among a couple other factors… but I’m learning the cervix is the #1 factor in deciding what size cup to get). I have a high cervix, so I went with the Regular.

To begin, cups do NOT go all the way up the way a tampon does.

Cups should sit in your vaginal canal so the stem of the cup is JUST inside of you. If you put it too high, the cup won’t be able to catch the blood coming out and you’ll get leaks. You can trim the little stem of the cup if it bothers you, but I found the Saalt Soft’s stem to be flexible enough that I didn’t feel it after a minute or two.

So, the deal with these cups is you have to do some origami folding to get them up in there. And then once in, they have to pop open like a flower.

There’s about 23423 different methods of folding and you will have to play around with a couple before deciding which fold is for you. 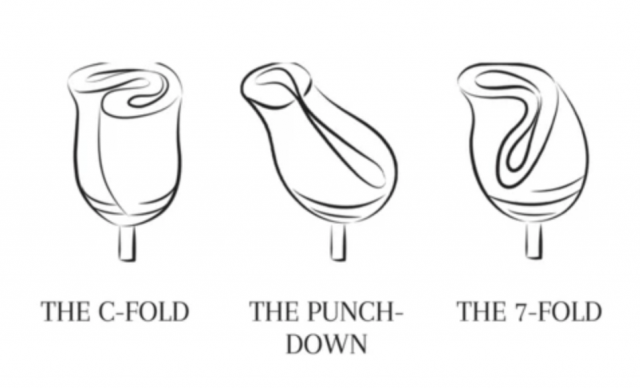 I initially went with the Punchdown fold, which is said to have a smaller point of insertion, but sometimes can have a difficult ‘pop open’ once inside.

The first day and a half was kind of a flop because although I thought the cup went in fine and popped open, it didn’t. I was getting some leaking/spotting. I was pretty bummed because I was overall liking the freedom of the cup.

After that, I knew something had to be changed here so I researched folding methods and learned that the C Fold, or 7 Fold, would give me much more success with the pop-open. The C Fold had a wider point of insertion, but is a little easier to do… whereas the 7 Fold has a narrower point of insertion but can be trickier to hold and insert at the same time.

ALAS… I found a winner!

Once I got the pop open down – which you’ll totally feel once the cup is inside you – you’re golden. It doesn’t hurt, but you’ll feel the cup pop open and know you’re basically good to go for HOURS.

This part I was warned could be tricky and very messy.

But, I personally had ZERO issues with this and it was never messy or difficult if you follow the directions.

Also to note, you shouldn’t be getting blood all over your hands. The cup catches all of the blood and you’re removing it by holding the outside of the cup.. so unless you have a bad seal/no pop open, there shouldn’t be blood on you unless you spill the cup as you remove (which I didn’t do the entire week… you just have to be careful).

This isn’t a tampon, you don’t want to rip this thing out hastily. Calm down. Take your time. Breathe a little.

Before your cycle starts, you’ll want to start out with a clean and sanitized cup. Boil for 5 minutes and then clean with a pH balanced soap. I use Summer’s Eve, but Saalt makes a wash just for their cups.

After you empty your cup during your cycle, there is no need to wash it again. Just rinse with water and reinsert.

When your cycle ends, boil again and wash and store until next cycle. Saalt includes an adorable and discreet travel pouch.

in public with your cup

A lot of people worry about what do you do when at work or in public with a cup that needs to be emptied.

I don’t think this would be that dramatic if you take a water bottle with you to the bathroom. Remove your cup, rinse it well with the water bottle, and reinsert.

Definitely make sure before you leave your house, your cup is freshly emptied so you have the max time available to be out and about. 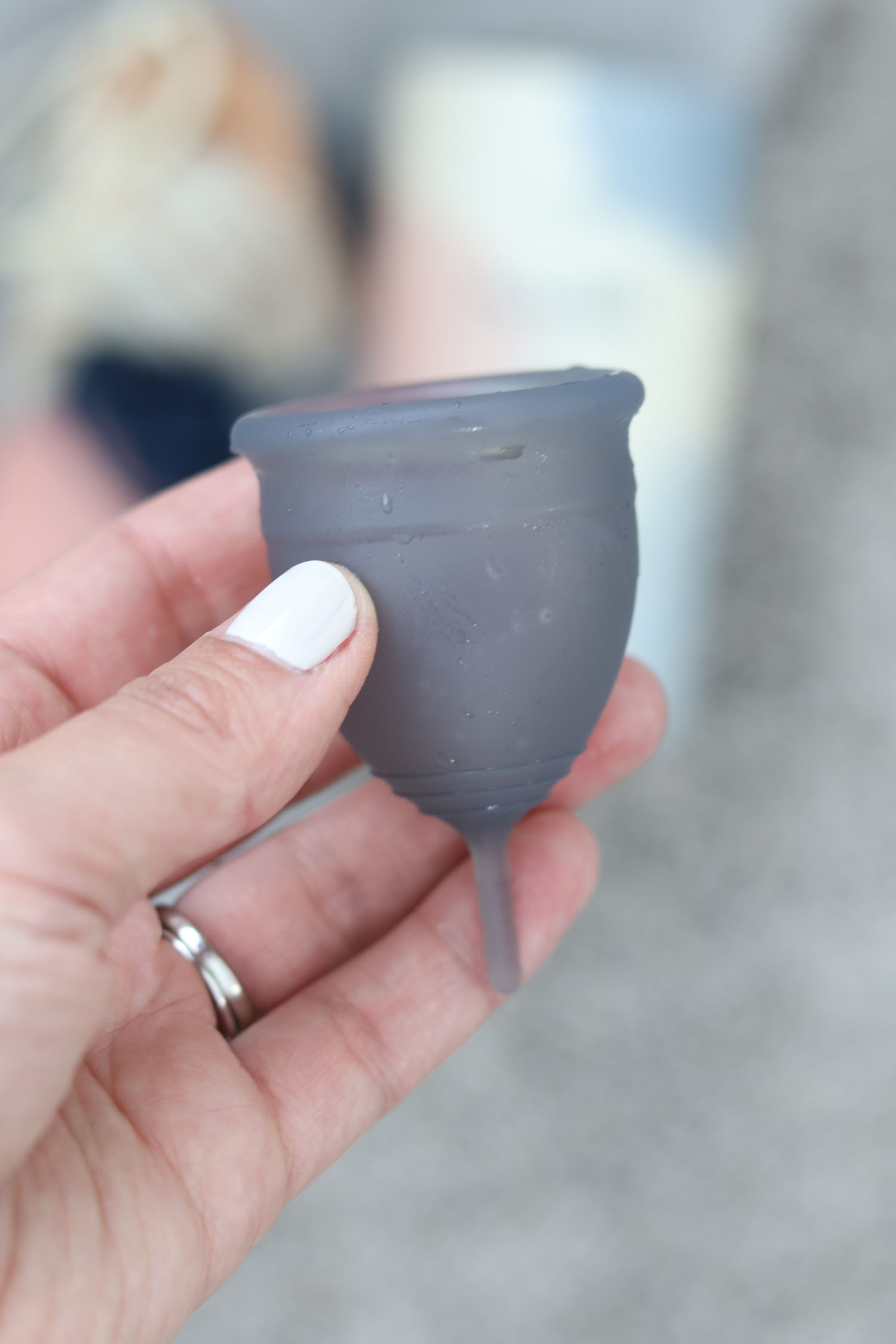 Although the cup is able to go 12 hours without being emptied, this was not the case for me the first two days of my cycle.

I lasted about 7.5 hours before needing to empty it the first day. Granted, my pop open wasn’t as good, so I’ll update this post after my second cycle if anything changes.

Also, you’ll begin to feel if the cup is getting full and you need to empty it. I cant really explain it but it is slightly similar to the feeling you get when you know you need a new tampon.

After my first two days, I was able to go the 12 hours with no problems.

I had little-to-NO cramping this cycle. Call it crazy… not sure… but I’m thinking it may have something to do with how low the cup sits inside the body that it doesn’t interfere with the muscle spasms.

Saalt recommends using a pantyliner the first couple of cycles until you’re totally comfortable using your cup. I have quite a few liners to use up, but once I finish using them, I’m going to purchase ‘period panties’ like Thinx (which can hold up to 2 tampons’ worth), to go totally waste-free during my period going forward… and stop ruining any of my nice underwear!

I had a great first experience with my Saalt Soft and so excited to get my period again (.. i cannot believe i said that ..).

I hope this helps you decide if a cup may be right for you. Let me know in the comments how your experience with non-pad/tampon menstrual solutions have worked. 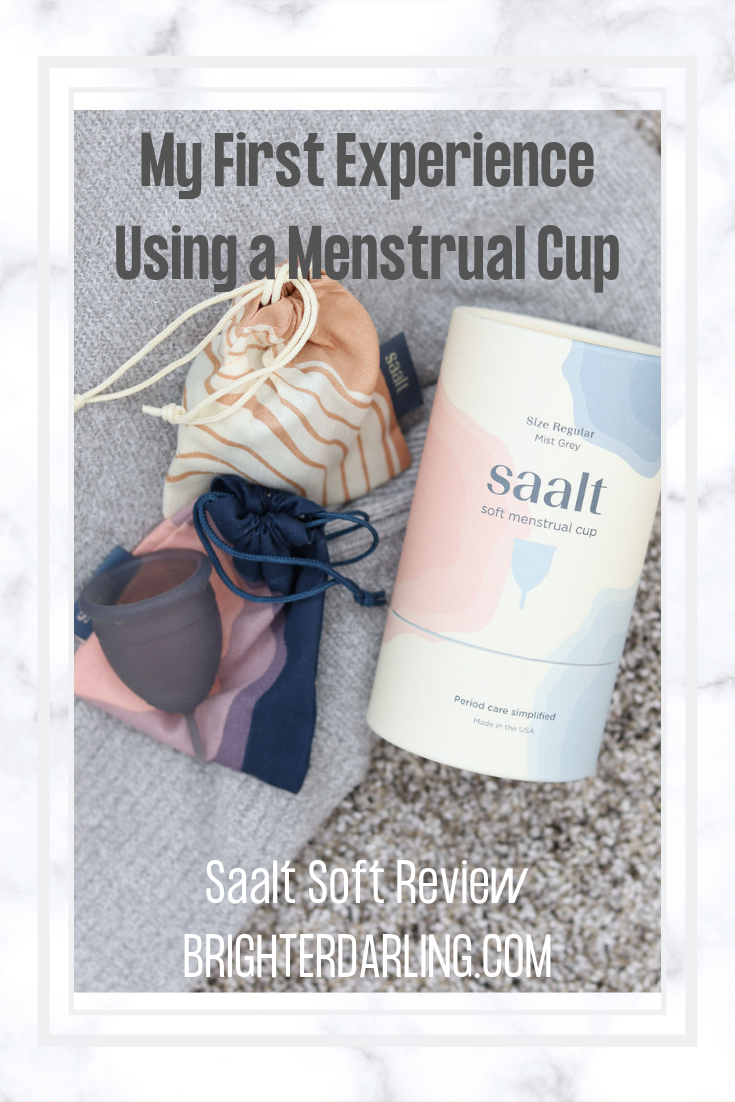 PREVIOUS POST
"Making Cleaner and Safer Beauty Choices…"
NEXT POST
"My Favorite Makeup Brushes For Everything"
0 comments so far.